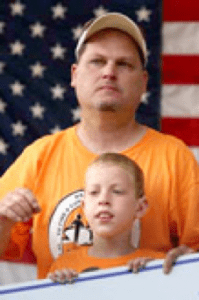 The Race for Adam Foundation, a volunteer non-profit organization dedicated to funding research projects to find a treatment and cure for Niemann-Pick Type C disease (NP-C) and related neurodegenerative disorders, began in 2005.  In July of that year, Sean and Amy Recke’s seven-year old son, Adam, was diagnosed with NP-C, a genetic neurodegenerative disorder for which there is no cure.  Due to the family’s kindness and respect for everyone, the community came together to help them; they are a family who has shown great patience, strength and hope in this time of urgency.  Adam has touched the lives of everyone he has met, and continues to embrace life with a perfect smile. With the support of the community, a seed of hope has grown and continues to branch through events that will promote awareness and funding for research into NP-C and related neuro-degenerative disorders.  The Foundation is named in honor of Adam Recke.

The Race for Adam Foundation is a strong community organization committed to helping all families who suffer from this rare disease and promoting awareness of Niemann-Pick Type C disease. It is a volunteer, nonprofit association and is recognized by the Internal Revenue Service as a 501 (c) (3) organization.

We pride ourselves in our commitment to find a cure:

Sub Tab: What is Niemann Pick Type C: Niemann-Pick Disease (“Niemann-Pick”) is actually a term for a group of diseases which affect metabolism and which are caused by specific genetic mutations. The three most commonly recognized forms of the disease are Types A, B and C.

Type C Niemann-Pick, although similar in name to Types A and B, is very different at the biochemical and genetic level. Patients are not able to metabolize cholesterol and other lipids properly within the cell. Consequently, excessive amounts of cholesterol accumulate within the liver and spleen and excessive amounts of other lipids accumulate in the brain. Type C causes a secondary reduction of ASM activity, which lead all three types to be considered forms of the same disease.

There is considerable variation in when Type C symptoms first appear and in the progression of the disease. Symptoms may appear as early as a few months old or as late as adulthood. Vertical gaze palsy (the inability to move the eyes up and down), enlarged liver, enlarged spleen, or jaundice in young children are strong indications that NPC should be considered. It is common for only one or two symptoms to appear in the early stages of the disease.

Type C Niemann-Pick has about 500 cases diagnosed world wide. It is believed that the number of people affected is higher but it is often difficult for the correct diagnosis to be made. Niemann-Pick Type C has been initially diagnosed as a learning disability, mild retardation, “clumsiness”, and delayed development of fine motor skills. It is not uncommon for a family to spend several years seeking a diagnosis before Type C is identified.

Type C is always fatal. The vast majority of children die before age 20 (and many die before the age of 10). Late onset of symptoms can lead to longer life spans but it is extremely rare for any person to reach 40.